This guest post is by RU senior Cassidy Avent, a SUST major who interned during the Summer 2015 semester at the non-profit organization, SCARCE (School & Community Assistance for Recycling and Composting Education), based in Glen Ellyn, Illinois.  Here’s another installment of Cassidy’s reflections on her work as an environmental educator to young people across the DuPage County area. 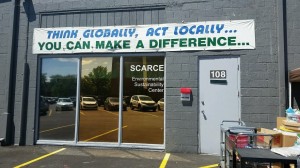 During the summer of 2015, I experienced a very rewarding and educational internship at a local nonprofit organization in DuPage County. School and Community Assistance for Recycling and Composting Education (SCARCE) has helped with environmental education and awareness for over 25 years. My duties as an intern included travelling around to different schools and community events in DuPage County in order to educate individuals about environmental issues, but also included working onsite at the Book Rescue and in the main office.

Kay McKeen, SCARCE’s founder and my employer, often needed me and the other interns to do research on certain subjects pertaining to environmental issues. Most of the research we did was about specific chemicals that are present in a lot of the everyday items seen in many homes. The chemicals we researched included triclosan, asbestos-containing vermiculite, and glyphosate.

Triclosan is an antibacterial and antifungal agent often found in many household products. It was first intended to be used only in a hospital setting, but now the chemical can be found in detergents, soaps, deodorant, cosmetics, and even toothpastes. Triclosan can cause many health issues when it comes in contact with skin or is ingested. Some of these effects include skin irritation, endocrine disruption, and antibiotic resistance. Also, when triclosan enters a waterway through runoff, it can have a negative impact on the aquatic ecosystem that is contaminated. Canada and Minnesota have now realized the ill effects triclosan has on people and the environment, and have successfully banned the antibacterial from being manufactured into products.

Vermiculite is a hydrous phyllosilicate mineral that is used as a soil retention enhancer. Using vermiculite is usually safe, but there is some vermiculite used in garden products today that is at risk of containing asbestos. Unfortunately, though, there is no way to tell whether or not the garden supplies you buy have asbestos-covered vermiculite in it. There is an alternative to buying potting mix that contains vermiculite, which is finely ground pine bark, also called “pine fines”. The bark has great water retention abilities, and there is no risk of asbestos!

Glyphosate is a widely used herbicide most commonly known as Monsanto’s Round Up. According to the World Health Organization, glyphosate is a “probable” carcinogen. While there is no concrete proof linking glyphosate to cancer in humans, the chemical is toxic to birds, fish, honeybees, and other organisms. When glyphosate is sprayed on weeds and other plants, it seeps into the soil and remains there with little leakage from rain and other water runoff because the compound is so strongly attracted to the soil. Instead of using glyphosate as an herbicide, vinegar can be used to get rid of weeds and other unwanted plants, and is nontoxic to both humans and animals.

Triclosan, asbestos-containing vermiculite, and glyphosate are only some of the many toxins that we encounter every day. Still, doing research on these substances at SCARCE has helped me realize to be more aware of the products I use within my home and to pay attention to the ingredients within those products. Avoiding toxic chemicals in household products whenever possible will not only keep humans safe and healthy, but it will also prevent toxins from entering the environment.

This entry was posted in education, health, internships, students, suburbs. Bookmark the permalink.
%d bloggers like this: